David is a Principal of the Firm, having been a Partner since 2006 along with Damian Quinn, and joined the Firm in 2002. David attained a Bachelor of Arts / Law from the University of Tasmania in 1996, followed by a Graduate Diploma of Legal Practice. David was admitted as a Legal Practitioner (Barrister and Solicitor) of the Supreme Court of Tasmania after a period undertaking articles with the Tasmanian Legal Aid Commission.

David relocated to Queensland at the end of 1998 and was admitted as a Solicitor of the Supreme Court of Queensland and a legal practitioner on the roll of the High Court of Australia.

David’s work has seen him appear in various jurisdictions both in Queensland and interstate, at both Courts of First Instance and Appeal Courts (State and Federal Courts), and Tribunals including the Administrative Appeals Tribunal. David has experience in a variety of civil matters and has acted in matters of legal significance including applying for Special Leave to the High Court, after applications from lower Courts including the Queensland Court of Appeal.

David spends his time outside of practice with his family, including his children, who are actively involved in sport.

David is currently a committee member of the Flinders Football Club, and acts in voluntary capacities for sporting clubs including the Alexandra Headland Surf Life Saving Club and Maroochy River Golf Club 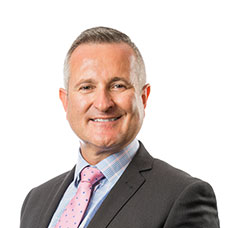